An operating room feels incredibly crammed, yet controlled; it's full of people, yet each person's job is very specifically plotted. Like cogs in a machine. Like the surgical tools placed meticulously on metal trays. And the light is so sharply white.

Even though it contained metal, I was allowed to hold my rosary, which was very comforting. I moved from hospital bed to operating table, sitting on its edge with my legs hanging over the side like a child. If you've had an epidural, you know how this goes: you relax, you hunch over--perhaps you're given a pillow to hug--your back is rubbed with alcohol and iodine, you're offered a hand to hold. The nurse who held mine reminded me of the nurse anesthetist; she was one of those people whose soft heart just permeates their whole self. I remember thinking, pridefully, that that nurse assumed I needed comfort. I'm not afraid of needles; an epidural doesn't faze me. But looking back, I'm so grateful for her loving gesture. I was terrified of everything after that epidural, and I suspect she knew it.

The nurses and I made small talk as the anesthesia team made small adjustments to the needle's position in my spine. Did I know what I was having? Did she have a name yet? Did she have siblings? I eventually lay down as the medicine took effect. I sought reassurance several times that I would not feel the doctor cut me—that they wouldn’t begin surgery until the spinal was in full effect. The anesthetist ran a small, spiked, plastic disc over my skin, from chest to abdomen to hips; I reported where and what I could feel, to ensure the spinal was doing its job.

When my legs essentially disappeared they were placed like a frog’s for the catheter. Vanderbilt is a teaching hospital, so it is very common to have students and medical residents observing various professionals. At this point, there was only one male in the room, a medical student on his OB rotation. I thought I’d be fine with his presence since my OB is male, but once that catheter process began, I hated having him in the room. I understand the importance of on-the-job learning, but in a way I felt like a specimen for study.

I am lucky to have had a smooth surgery, a healthy baby, and a recovery without complications—yet it is difficult to revisit these scenes.

Patrick was escorted back to the OR, wearing a blue puffy cap like mine (again—what had been the point of styling my hair that morning?). He held my hand and kissed my forehead and said that a woman from our parish had come to give him communion in the pre-op room. I knew a parishioner would be back to do the same for me the next day.

At some point an older man came in to ask if he could get my placenta afterward to use for research. The way he asked—as if he simply needed to borrow a pen—struck me as comical in an offbeat way.

My OB arrived, and a nurse read him the script I had already heard a few times that morning: “This is Rachel Simpson, 29 years old, MRN something something, repeat cesarean.” He asked how I was doing and I can’t remember how I responded, but I remember feeling very exposed. I don’t think any amount of rapport with a provider can prepare you to lie on your back, basically naked and very immobile, waiting to be cut open, trusting that neither you nor your baby will be damaged in the process, shoving “what if”s back down into your subconscious.

A screen was lowered across my torso, and as the surgical team talked among themselves in low voices, I began to smell burning flesh. It took me a minute to recognize what I was smelling—and another to fully realize it was my own skin. I had thought they started with a scalpel. The OB gave me updates periodically: “We’re just working through some scar tissue... You’ll feel some pulling and pressure in a bit... It gets a little more difficult to get the baby out after each c-section... You’ll have a baby in about ten minutes...” I told Patrick I could see my stomach reflected in the metal around the light above me—a blur of yellow and red. Someone moved the light.

The pushing and pulling began. Although I was numb, I was aware of my lower half being moved. I began to feel like I couldn’t breathe, like one anvil was on my chest and another was inside my lungs. I told Patrick I couldn’t breathe. He reminded me that that always happens; it’s the spinal tricking the brain into thinking the diaphragm isn’t moving. A nurse assured me my oxygen levels were fine. I tried to chuckle at the silliness of my fear and my forgetting.

The OB announced that he was pulling out our little girl. A square flap in the screen was lifted, and she was held in front of the thick clear plastic for us to see, red and purple and slippery and nearly sleeping, it seemed—or perhaps stunned. I think I said, “Hiiiii!” One tear fell down my cheek as I tried to force myself to feel the enormity of that moment. She was taken to be cleaned and weighed and swaddled and that’s when I heard one very high-pitched, baby bird-like cry. I only remember one little squawk. Then she was brought to me to hold, with assistance, as I was flat on my back with weakened arms and lots of medication pumping through me. She was asleep, and I remember being struck by her quiet and stillness. I think I said, “Who are you?” She seemed starkly pale, and I wondered if that were truly her or the effect of the bright white light. She weighed 6 pounds, 6 ounces and seemed remarkably smaller than my first two babies. I worried we had gotten her out too soon. I wondered if she would have fit through my pelvic inlet, as she weighed 12 ounces less than my firstborn. 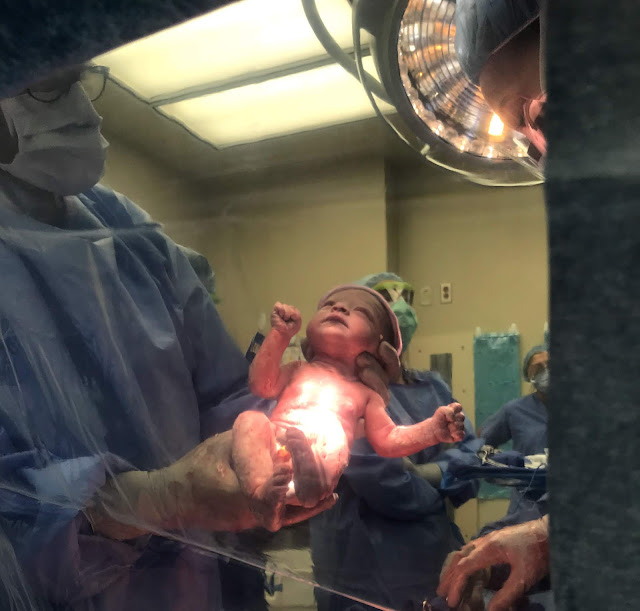 After a few minutes of holding her, a nurse laid her into a rolling bassinet to bring to the nursery while I was sewn back up. Patrick accompanied her; I was left with my thoughts on the operating table. Medical personnel labeled and tallied surgical equipment. I think my OB dictated a report for someone to write. He told me about dermabond, the glue that would hold my exterior incision together. He said my uterus had normal thinning and scar tissue but would be fine for another pregnancy. He told me I did a good job, although I had technically done nothing.

I asked (like I always do) if I should be able to feel my legs yet. A nurse reminded me I would be numb for a while. A hospital bed was wheeled next to the operating table, I was told to fold my arms over my chest, and a team of four lifted the sheet under me to move me to the bed like a sack of potatoes—rather, like many sacks of potatoes. That’s an especially humbling and vulnerable part—to feel so heavy and helpless. It sounds melodramatic, but being moved like that reminded me of the way you'd handle a cadaver. The awkward process made it difficult to process the fact that I had finally met my baby. She was in my arms for a few clumsy moments, and then she was gone, and now I had to wait an hour or so to see her again, to hold her skin-to-skin, to try to nurse.

I was returned to my pre-op room, which added to the strangeness. I had just been there three hours prior, baby in utero, feeling anxious but physically fine. Relatively suddenly, I was back where I started, but without a full-term stomach, unable to move, feeling the effects of all the meds pumping through me, without my husband and baby, hanging out with a stranger keeping tabs on my very low blood pressure. Time was so slow; I just wanted my baby.

I don’t know how much time passed, but I was so excited to see her bassinet wheeled into the room. My bed was lifted upright and she was handed to me. I took off her swaddle and unbuttoned her itty bitty onesie to wake her, still so calm and silent. She roused a bit and latched like she had been nursing for months already. That’s when the relief, the euphoria, the knock-you-down gratitude finally hit. That’s when the heavy tears streamed. That’s when I finally connected with my baby girl. 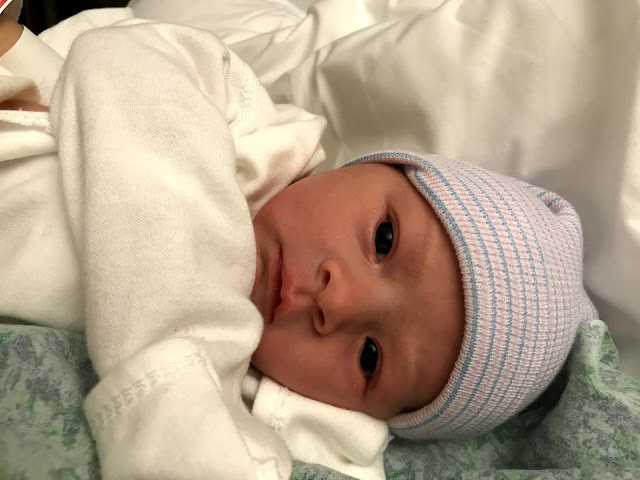 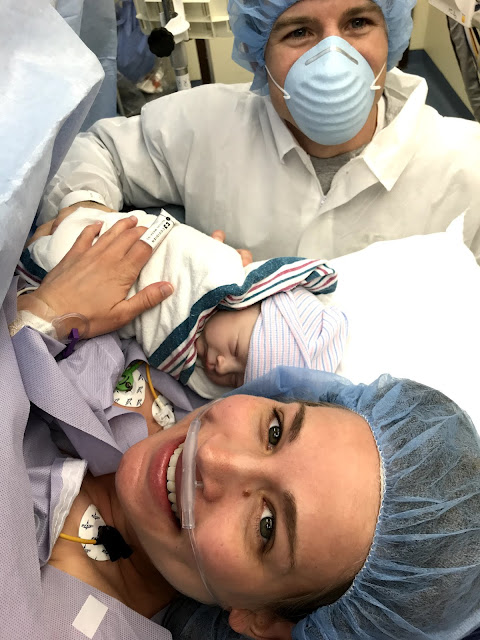 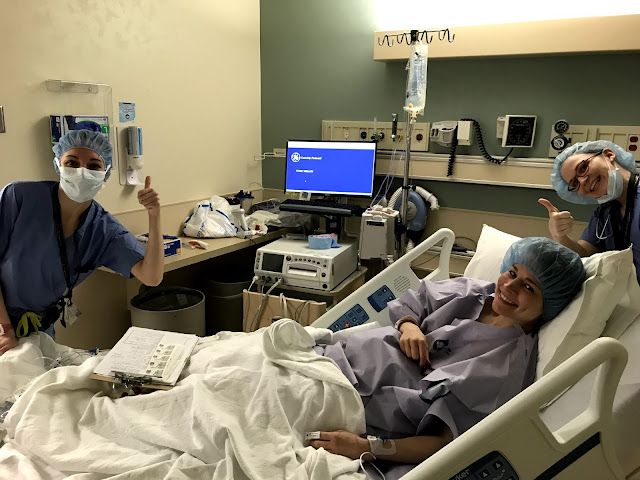 Rachel Barga Simpson
My name is Rachel, and I have a thinking problem.